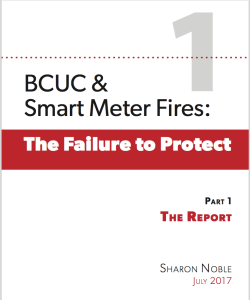 Sharon Noble, Director of Coalition To Stop Smart Meters, last week released a report based on three years of research into smart meter fires and failures. Noble charges that BCUC has failed to do its job. Even after BCUC received a formal complaint with evidence that public safety is being jeopardized, the Commission did nothing. BCUC neglected to order BC Hydro and FortisBC to provide “reasonable, safe, adequate and fair service”. The report asserts:

2)    Regulations and laws are being broken with impunity, e.g. meters are being removed from the fire scene, electrical inspections are not being done;

3)    Reporting is haphazard at best;

4)    The meter is combustible, poorly designed, with critical components uncertified by any agency to be safe;

5)    BC Hydro did not perform its due diligence by having an independent electrical engineer inspect the meter for safety prior to signing the contract. Rather it accepted ITRON’s assurances;

6)    Smart meters have burned, melted and caused homes to burn. BC Hydro and BCUC both deny this is happening.

Consumer Affairs recalls defective devices, such as cars and electrical appliances (https://www.canada.ca/en/health-canada/services/consumer-product-safety.html). Consumer Affairs has no jurisdiction to recall defective smart meters because the meters are owned by the utility company, not by any of the consumers who are required to use them. Noble observes, “Who is watching out for us, ensuring that these devices mandated by law and installed on our homes without our permission are safe? No one.”

All the pdf files are large, therefore accessing the links will not be a quick download. Your patience is appreciated.

2.   Research documentation (2 pdfs*)
Includes reports received from the Fire Commissioner, the Attorney General’s Office (JAG), the Ministry of Transportation and Infrastructure (TRA), BC Safety Authority, BC Hydro, and victims.
The reports in these Volumes are in the same sequence as the summaries provided on the spreadsheet in Appendix W.

COVER OF THE REPORT
Credit: Coalition to Stop Smart Meters