Nomi Davis and Jessica Klein have initiated a Class Action Lawsuit against BC Hydro regarding the installation of wireless Smart Meters on their homes and businesses. 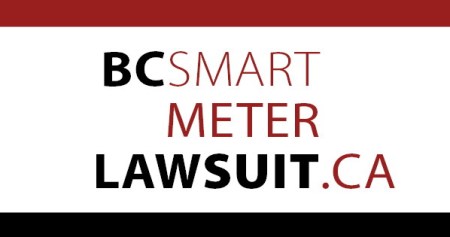 July 20, 2016: COMMENTS about Judge Adair’s DECISION not to certify the class action.  For now, please do not send in registrations or donations for legal costs.

Nobody has ever said that the challenge of bringing public accountability to BC Hydro would be easy, but significant and encouraging steps have been realized despite the court’s refusal of the application for class action certification of a civil lawsuit against BC Hydro.

Of greatest importance is that the foundational argument of the case survived the attack by BC Hydro, and the court found merit and plausibility in the success of a cause of action which embodied the Charter of Rights, Section 7 Liberty Interest. In short, the court recognized that the right to be free from government interference regarding choices of a fundamental and personal nature within one’s home was a valid argument. Now that’s a success that we would not have achieved without this class action application.

The court’s recognition of the Section 7 Liberty Interest as it relates to forced smart meter application and unacceptable microwave radiation emissions exposure therefrom is a major development and a big step up the stairway to success.

Where this court application for class action certification failed is in the identification of a common class. There are several main reasons which cause concern over smart meter installation – health damage, health concerns, fire risk, security & surveillance and billing concerns account for the majority of varied reasons which could give rise to a resident refusing a smart meter. Given that the court was analyzing the viability of the class action procedures, not the merits of the case, it is clear that the next action would be one where the class of persons would need to be narrowed so that there was a common issue within the group.

Since the court has affirmed the viability of a Section 7 Liberty Interest cause of action, now is the time to analyze how to use this valuable court decision as a relevant legal landmark upon which a refined case can be brought against BC Hydro.

It is also important to note that the decision did not assert that the microwave radiation emissions from smart meters is safe, and since the Notice of Civil Claim against BC Hydro was filed in 2013, recent credible science is reporting the possibility of devastating ill health effects from wireless exposure. Unfortunately, scientific articles which would have further supported health concerns were released after the court had closed submissions. Check out the US National Toxicology Program science article on brain and heart cancers from two years intermittent “cell phone” exposure. (http://biorxiv.org/content/early/2016/05/26/055699)

BC Hydro asserts that the Clean Energy Act allows them to act with impunity even though its actions and the roll out of the smart meter program violates our fundamental principles of a democratic society. We know that the Charter protection afforded to every individual in BC is activated when members of the public are being subjected to undemocratic and oppressive tactics of a governmental agency, and BC Hydro is not excluded from the responsibility to abide by the Charter of Rights. While we disagree with certain statements made in the court decision, we are thankful for the recognition of the validity of the Charter Section 7 Liberty Interest argument, and now continue to seek redress as we move ahead.

For complete information re Lawsuit: